This post is part of the series Building your own Software Defined Network with Linux and Open Source Tools and covers the re-designed topology of the distributed infrastructure.

This post will focus on the distributed servers as well as the wireless backbones and will only cover the around 1.000 client nodes from the perspective of connecting them to the backbone (“gateways“).

With all the things mentions in Specifics and history of a Freifunk network in mind I got back to the drawing board and thought about a new design.

In contrast to the strong focus on B.A.T.M.A.N. adv. in the previous network design, the focus of the new design was on creating an IP backbone with small broadcast domains and Dual-Stack everywhere. The pain with OSPF in a large l2 based VPN was a strong motivation for building point-to-point links from now on and set up automation for doing so.

Former experiments with OSPF and filtering were as troublesome as one could expect (after having some experience with networking :-)) and came back hounting me now and then. Therefore the new design should use OSPF and iBGP for distribution of routing information, implementing a clear separation between loopback reachablity + in-band management and production prefixes.

POPs not connected by wireless links should be connected using point-to-point VPN links which allow the use of dynamic routing protocols on top of it.

The distributed infrastructure will have separate uplinks to the Freifunk Rheinland backbone and should implement hot-potato routing to use the nearest exit.

Each POP having meaningful uplink capacity will host a border router. All systems local to that POP – probably a virtualization hosts and VMs running on it – should use this local uplink. If the local uplink isn’t operable for whatever reason, but the POP is still connected to the Freifunk Hochstift network, a border router at another POP should be used. By the means of OSPF costs it should be possible to influence what backup paths will be used.

The new infrastructure should be as flexible as possible, e.g. it should be possible, to run infrastructure services at any location or even at multiple locations at the same time (read: anycasted). The setup should scale up to lots of wireless backbone POPs, a sane number of distributed virtualization hosts and some gigabits of traffic. (Having quite a lot of VPN connections over the public Internet instead of VLLs / waves etc., this isn’t as trivial as it sounds.)

The article about Specifics and history of a Freifunk network introducted the conecpts of regions and sites. Each site translates into an instance of the B.A.T.M.A.N. adv. mesh protocol. Each B.A.T.M.A.N. site will be operated by two ore more gateways for redundancy and performance reasons. Within the new infrastructere there should be up to 6 gateways at different locations running multiple B.A.T.M.A.N. sites. It should be possible to configure any n:m mapping between gateways and B.A.T.M.A.N. sites.

To fully exploit the advantages of the wireless backbone(s) operated in the Paderborn and Warburg area all backbone routers should be able to carry any number of B.A.T.M.A.N. sites as well to allow connecting suburban sites to the gateways.

No configuration file within the whole infrastructure should be edited manually on the target system. Every part of any configuration which can be programmatically generated should be generated.

With all these goals in mind we ended up with the following network topology for POPs connected to the wireless backbone: 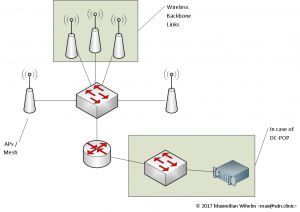 From top to bottom there are some wireless backbone links providing transparent layer2 bridges to adjacent backbone POPs. The wireless devices are connected to a WISP switch providing Power-over-Ethernet (PoE), VLANs and SNMP capabilities. VLANs are used to separete the connections to adjacent backbone POPs, the management network as well as local B.A.T.M.A.N. adv. and/or client network breakouts.

The backbone router (BBR) terminates all VLANs and will form OSPF adjacencies to all adjacend BBRs. Each two adjacent BBRs use one unique VLAN (VLAN id 20xy) to form a direct logical L2 PTP connection. Each wireless PTP VLAN is configured with a /31 prefix for IPv4 and a /126 prefix for IPv6. All prefixes used for wireless links are assigned from a defined pool (currently 10.132.253.0/24 / 2a03:2260:2342:fe00:/56) on a use-first-free-prefix basis.

Depending on the POPs location and geography there are some APs deployed outside or within the building to provide access to the Freifunk network. At locations where it seems useful there are entry points to the mesh network as well. The access network is configured with the same VLAN id everywhere (100 + site-id) as is a mesh breakout (200 + site-id). Those VLANs are local to the POP and usually not exposed via any wireless backbone links.

Currently two POPs in the city of Paderborn are on the roof of a data center where we are allowed to house servers (which we use as virtualization hosts for infrastructure services). This of corse is the best case scenario and all a Freifunker could wish for. At these locations there is one VLAN connecting all routers, hosts and VMs at this POP (/28 + /64) and is used to build OSPF adjacencies between all nodes.

See the VLAN page within the FFHO wiki for a complete nomenclature of all VLANs.

To mitigate this SPOF the local management VLAN is exposed to each adjacend POP via the WiFi backbone links. This way in the case of an outage of POP A‘s router, two things would have to be done to reconnect the management interfaces of all devices at POP A to the network: Configure management VLAN A on the switch at POP B and configure an SVI for A’s management network on POP B‘s router. This safety net already came in handy at some occurences 🙂

Each management VLAN corresponds to a /24 prefix which is assigned from a defined /16 pool on a use-first-free-prefix basis.

The point-to-point VPN links are currently realized with layer2 OpenVPN tunnels. That way OpenVPN only cares about transporting Ethernet frames / IP packets from one side to another and routing could be controlled by bird. Each tunnel is configured with a /31 prefix for IPv4 and a /126 prefix for IPv6. All prefixes used for VPN links are assigned from a defined pool (currently 10.132.254.0/24 / 2a03:2260:2342:fd00:/56) on a use-first-free-prefix basis.

The assignment of IP address on the tunnel interfaces is done by ifupdown(2) which is called by OpenVPN on interface up and down events.

The prefix length of /126 has been chosen to facilitate the principle of least surprise. As Linux systems (read: iproute) strip any trailing zeros in IPv6 addresses when displaying them, an address of 2a03:2260:2342:abcd::0/127 would be shown without the last 0 which might lead to wrong conclusions when debugging. Using prefix::1/126 and prefix::2/126 this potential (cosmetic) issue can be circumvented. As the whole /64 is reserved anyway that’s not a problem with regards to address space usage.

Creating a separate VLAN for every connection between two B.A.T.M.A.N. adv. routers for every site or using some overlay mechanism to transport the B.A.T.M.A.N. adv. traffic over the IP network. The first option does not scale at all and would create a VLAN management mess and the routers as well as on the switches, so option two remains. Creating an overlay network is something which is in most networks genes and therefore comes naturally 🙂

There are some choices for building a PTP layer 2 overlay over an IP network:

MPLS for Linux wasn’t a thing back in the days and to the best of my knowledge doesn’t provide layer 2 services in current implementations either, so isn’t an option. OpenVPN would generate a lot of context switches as it’s a user-space application and crypto would not be needed on the wireless backbone (to be fair, a NULL-cipher could be used), so isn’t ideal either. Many people complained about problems and oopses with GREtap tunnels when I was redesigning the backbone which discouraged their use.

VXLAN was already a thing and a friend threw RFC7348 at me and it turned out, it was already implemented in the Linux kernel and in iproute. After playing around with it, I was set. Trying to add support for VXLAN to Debians ifupdown seemed possible and a quick test was promising when the same friend threw Cumulus Networks ifupdown2 in the mix which is a rewrite of ifupdown in Python and the capability to write addons. It came with a VXLAN addon already present.

So we ended up encapsulating B.A.T.M.A.N. adv. traffic between backbone nodes into VXLAN. One VTEP for each PTP connection for each site. All VNIs and Multicast IPs are calucated from underlaying PTP VLANs and the site ID.