As every year some weeks after the EasterHegg, the GulaschProgrammierNacht (GPN18) took place at  Hochschule für Gestaltung (HFG) and Zentrum für Kunst und Medien (ZKM) in Karlsruhe. It’s a four day event with a lot of lectures, workshops, Gulasch, a lounge and other amazing things; like any chaos event. As usual the C3VOC did an amazing job streaming and recording (nearly) all sessions! 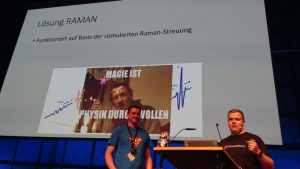 The GPN had a huge programm with so many technical, cultural, social, … sessions. I would like to especially highlight Alles was ihr schon immer über Glasfasern wissen wolltet (de) by Marc & Momo, Moderne Kommandozeilen-Werkzeuge (de) + Standards – Gut, dass so Viele zur Auswahl stehen (de) by Martin as well as One Brain, One Keyboard, One Editor (en) by Miro. 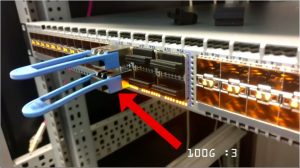 At the NOC – as always – we had some fun with shiny hardware and running a 4,5 day conference ISP for fun and Tschunk. This year Juniper and Arista provided some nice boxes which made up the core of the GPN network. An Arista DCS-7280SR was the core and border router and connected the GPN18 to the world with 120Gbit/s, a Juniper QFX5100 distributed all that bandwidth within the building, which appeared to be a setup we might want to adopt for future GPNs. As it turns out Aristas Cisco-like CLI is not quite cisco, but better 🙂

As it happens, not everything went after plan and we have a major downtime in the middle of the night due to a fiber cut and a misconfiguration coming together – Murphy must have been at the GPN, too. We had built a 2x40Gb/s LAG with two redundant paths from core to distribution, but one interfaces wa

s in 4x10G mode instead of 1x40G and therefor not part ofthe LAG (so check your ports kids!) and one fiber patch of the active path was taped to the wall and broken by accident. Luckily it was in the middle of the night.